Su-su is our Braveheart winner for March 2017 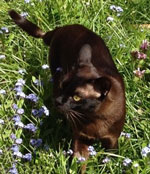 Su-su was rushed in to us after being attacked by two dogs. On arrival she was immediately treated for shock and was examined for any injuries. Within the hour Su-su had already begun to drastically improve, no breakages were found and her bladder was palpable although her tail looked as though it had been punctured by a tooth.

X-rays were taken to ensure no internal injuries had occurred, no other injuries were found apart from bruising on her hind leg and the wound on her tail. The tail puncture was very deep and had narrowly missed the ligament so we were able to save her tail and stitch up the wound.

Su-su was such a lovely girl to nurse and although she wasn’t impressed with her house arrest and medication, she bravely continued to recover with the love and support of her owners. While she wasn’t thrilled with not being allowed to groom her tail, now that the stitches have been removed she is once again back to her mischievous self at home!

Bumble presented to us following an episode of hair loss which left her nearly bald. Her skin looked normal and she had been treated for mites which led us to be suspicious she had disease going on inside. We strongly suspected Bumble was suffering from cystic ovarian disease which is common in older female guinea pigs and causes them to loose their fur and eventually can be life threatening if the cysts rupture inside the abdomen. We took Bumble in for the day to be spayed to remove the offending ovaries and uterus, and sure enough she had enormous cysts on both of her ovaries which needed to be surgically removed. Bumble recovered extremely quickly from the general anaesthetic and major surgery and was busy munching on her hay again a few hours later! She was the model patient throughout her surgery and recovery and has since been sprouting her hair back again. 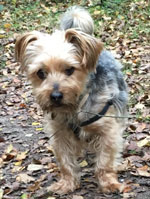 Moley came to see us, following some episodes of coughing. A few days later Moley had gone downhill and was very distressed and struggling to breathe. Moley had a heart murmur so he was referred to have his heart and lungs assessed so he could be started on the best medications. Following the start of treatment Moley was much improved and back to his usual bright, happy and curious self. Due to the long term medication Moley needs to have regular blood tests to check his kidneys and he is always extremely obliging. He is managing really well on his medications and is a pleasure to treat.

As a mark of respect to Queen Elizabeth II, except for essential work we will be closed on Monday 19th September 2022. If you are concerned about your animal’s health or require an emergency call-out on the 19th, please call the usual number where you will be connected to our vet on call.

We are using cookies to give you the best experience on our website. Find out more about which cookies we are using or switch them off in settings.

Our website uses cookies to distinguish you from other users of our website. This enables us to provide you with a good experience when you browse our website and also allows us to improve our site.

You can find out more on our cookie page at any time.

If you disable this cookie, we will not be able to save your preferences. This means that every time you visit this website you will need to enable or disable cookies again.

This website uses Google Analytics to collect anonymous information such as the number of visitors to the site, and the most popular pages. Keeping this cookie enabled helps us to improve our website.

Please enable Strictly Necessary Cookies first so that we can save your preferences!