Chewie is our Braveheart winner for January 2017

Chewie came to see us as he was suddenly wobbly on his back legs and had become more vocal and didn’t want his food. On examination, his abdomen was very hard and became painful when his bladder was palpated, this indicated a blocked bladder. After consent from his owner, he was rushed into surgery to unblock his bladder.

Chewie was placed on IVFT and a urinary catheter was placed, he was closely monitored over the next few hours and given medication to make him more comfortable. He was sent to our out of hours as he needed to have intensive monitoring overnight, he came back to see us and we decided the urinary catheter could be removed.
Through cuddles and grooming we managed to tempt Chewie to eat, he was so brave and cheerful whist with us and was a delight to nurse. We wish him the best in the future.

Scrumpy came to see us as he had lesions in his front paws, after taking swabs from these areas the results came back diagnosing interdigital furunculosis which is a fairly unusual condition.

Scrumpy has been extremely brave and patient throughout his visits to us and taking all his medications; he has also tolerated us whilst we tried out various types of boots to find the best to help protect his feet whist on walks!

We look forward to all his visits and it is nice to see that he still comes to see us with a smile on his face and a wagging tail. 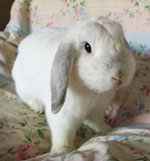 Casper has been coming in to see us over the years needing his front teeth clipped. He has been so patient and calm throughout every visit but recently his visits became more frequent as the teeth needed to be cut more often. After this was noted it was decided it would be in Casper’s best interest to remove his front teeth as the ordeal of coming in every week was beginning to take its toll on him. Casper was admitted and placed under GA and the teeth were removed successfully.

Casper recovered quickly and is now at home with his family, no longer bothered by his fast growing teeth.

Rosalie was admitted as fresh blood was coming from her vulva, after closer examination a vaginal polyp was found and she was tender when her abdomen was palpated. An FNA was taken and sent to our external laboratory, results came back that the polyp was a benign tumour. As the bleeding had stopped Rosalie was sent home for her owner to monitor. Rosalie’s owner has decided to bring her back to be spayed once her season has finished as this will reduce the likelihood of more forming.

Throughout her time with us Rosalie took everything in her stride with no fuss and was such a lovely dog to nurse as nothing seemed to faze her. We wish her and her family the best in the future.

As a mark of respect to Queen Elizabeth II, except for essential work we will be closed on Monday 19th September 2022. If you are concerned about your animal’s health or require an emergency call-out on the 19th, please call the usual number where you will be connected to our vet on call.

We are using cookies to give you the best experience on our website. Find out more about which cookies we are using or switch them off in settings.

Our website uses cookies to distinguish you from other users of our website. This enables us to provide you with a good experience when you browse our website and also allows us to improve our site.

You can find out more on our cookie page at any time.

If you disable this cookie, we will not be able to save your preferences. This means that every time you visit this website you will need to enable or disable cookies again.

This website uses Google Analytics to collect anonymous information such as the number of visitors to the site, and the most popular pages. Keeping this cookie enabled helps us to improve our website.

Please enable Strictly Necessary Cookies first so that we can save your preferences!